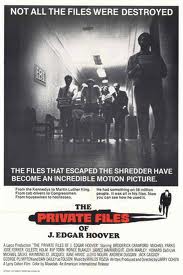 The Private Files of J. Edgar Hoover is a 1977 film directed by Larry Cohen. It stars Broderick Crawford and James Wainwright. The all star cast includes Jose Ferrer, Michael Parks, Celeste Holm, Ronee Blakely, Tanya Roberts in a cameo role, and in final screen appearances. Both Broderick Crawford and Dailey met with then First Lady Betty Ford and helped director Cohen get permission to do the film’s on location cinematography in Washington, D.C., in locals where the real Hoover visited or worked. The film was shown at the Kennedy Center in Washington to a mixed response from Republicans and Democrats who did not like the dark visions Cohen evoked on American politics and the portrayals of Presidents Franklin D. Roosevelt and Richard M. Nixon: actor Howard Da Silva played Roosevelt, and “Richard M. Dixon” plays Nixon. After it was shown in Washington, the film took a limited nationwide release to theaters, and got a full release to video and television into the 1980s and 1990s.

The film is a chronicle of forty years in the life of FBI Chief J. Edgar Hoover, starting first in the time of Prohibition, as he enforced the law on gangsters like Dillinger. Later, the Chief comes up against the Red Scare of the 1950s, the Kennedys, the wave of change in the 1960s, and his hatred of Dr. Martin Luther King. Examined here is the allegation that he had an abnormal sexual life.