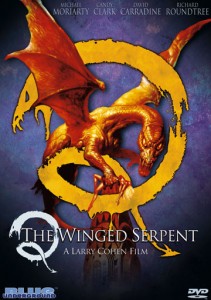 The film’s premise is that the Aztec god Quetzalcoatl, the “winged serpent”, has been resurrected by a cult in modern New York City and is flying about, snatching people off the skyscrapers. Carradine and Roundtree are police detectives investigating the bloody, entrail-strewn (and strangely mostly-rooftop-set) path of disappearance, death, and dismemberment about whose obvious — but staggeringly aberrant — cause the NYPD, the Mayor’s Office, and the Office of the Medical Examiner, are in complete and angry denial. Meanwhile a reluctant getaway driver for an ice crew/blues piano player(Moriarty (the actor is also a Blues composer, and is actually playing his own compositions as one of his character choices) hotfooting it away from the uniformed cops after a jewel heist gone bad, happens upon the deity’s lair and tries to extort a fat wad of cash in small bills from the city’s coffers in exchange for the whereabouts of the wayward Winged God’s feathered-dragon-form’s nest and home.