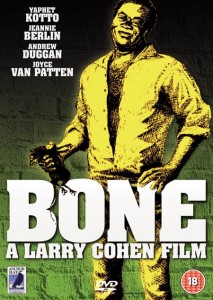 Larry’s first film was Bone, which was released in 1970.

Bone is an anomaly in genre-meister Larry Cohen’s long career behind the camera. Part black comedy social satire, part overblown pompous civil rhetoric, it speaks of its era and making (the late ’60s, early ’70s) better than 99% of the movies made in said timeframe. In its characters are housed the philosophical dynamics of the American community circa Vietnam: Bill is The Establishment, the oblivious leader of a dying regime that can’t see the protest for the pleas; Bernadette is his long suffering wife, a spirit of liberation and approaching feminism locked in a Phyllis Schlafly attitude of home and hearth; Brett Sommers as the barroom X-Ray Lady is the true old guard, the Great War’s lost generation of elderly citizens who in just a few more short years will be forgotten, forced to eat cat food to survive; Jeannie Berlin as the Wild Child is flower power and personal freedom run amok, a hippie whose free love ideals have taken a dark, sinister twist. And then there’s Bone. A big black man looking to commit a crime of convenience for the financial windfall he feels he deserves, he surely represents racism and minority disenfranchisement. But he also spins that conceit around to show how poverty and lack of power can lead to a hopeless state of mind, even when one might not be necessary. Add a long lost son (either to the Asian conflict, or drugs—take your pick) and the borderline cliché of used car salesmanship (which was still fresh 34 years ago) and you’ve managed to boil down the human condition of the post-’60s hangover quite well. Bone has something to say about the way we lived back then. And it says it brilliantly.