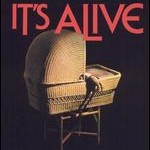 It’s Alive is a 1974 American horror film written, produced, and directed by Larry Cohen. In the movie, a couple’s infant child turns out to be a vicious mutant monster that kills when frightened. Notable talents involved in the movie were Bernard Herrmann for the score (noted for his work on many films of Alfred Hitchcock) and Rick Baker for makeup and puppet effects.

In Los Angeles, Frank Davis (John Ryan) and his wife Lenore (Sharon Farrell) are expecting their second child. Frank is a successful public relations consultant and his wife is a stay-at-home mom for their first child, Chris (Daniel Holzman). The couple had avoided having a child for several years while Lenore took contraceptive pills. When the child is ready to be born, they leave Chris with a family friend, Charley (William Wellman, Jr.) and head to the hospital.

Their second child is born monsterously deformed, with fangs and claws. Immediately after birth, one of the doctors attempts to suffocate the child. The child kills the doctors and nurses, and flees through a skylight. Lenore is left alive, screaming for her child as a horrified Frank discovers the carnage.

Frank and Lenore are allowed to leave the hospital while the police investigate the killings. Unknown to anyone, the child is making its way to the Davis home, killing people it comes across, including a musician and a milkman. As the killings continue, the press and the police hound Frank and Lenore.

When talking with medical researchers investigating the case, Frank is reminded of watching Frankenstein and Karloff’s portrayal of the monster. He looks at the child as related to the monster and comes to see himself as Dr. Frankenstein, the true monster as he created the original creature. Frank denies the child is his son, and joins the hunt for the murderous infant.

Meanwhile, the doctor who prescribed the prescription drugs to Lenore is contacted by a pharmaceutical executive. The executive acknowledges that the child is a genetic monstrosity that may have been created due to the prescription drugs. He tells the doctor that the child needed to be totally destroyed to prevent research that might point to its origin. After Frank is called to a local school where a break-in has been reported and a police officer is found killed, the infant makes it way to the Davis home where Lenore accepts the child as her son and hides him in the basement. Missing his family, Chris runs away from Charley’s house to go back home, and Charley follows him. Frank discovers that Lenore is hiding the infant, and Lenore pleads with him, saying the child is just scared and frightened and would not hurt the family. Frank takes a gun into the basement, still intent on killing the monster where he finds Chris talking to his little brother, saying he will protect him. Frank yells for Chris to move and shoots at the child, hitting it.

The infant runs out of the basement and leaps at the just-arrived Charley and bites his neck, killing him. The child flees as Frank shoots again. Lenore runs into the basement screaming at Frank, who yells that her son just killed Charley. He slaps his wife, telling her to take his son back upstairs while he hunts the murderous infant.

The police contact Frank and inform him that the child has been tracked to the sewers. Frank takes a rifle into the sewer to hunt the infant. While in the sewer, Frank catches sight of the child and leaves as the cops continue searching. As Frank nears the child, he realizes that the child is simply frightened and would not hurt him. He apologizes for hurting the child, and picks up the crying infant.

Wrapping the baby in his coat, Frank tries to escape the police, but is confronted as he exits the sewers by a mob of armed cops intent on killing the child. He pleads for the cops to take him away, study him, but to let the kid live. As the fertility doctor screams for the police to just open fire and kill them, the child leaps from Frank’s arms and attacks the doctor. The cops open fire, killing both the infant and the doctor.

As the Davises are taken home by the police, a call comes in from HQ, telling the detective that another monster baby has been born in Seattle.

Larry Cohen at The Museum of the Moving Image, NYC


Larry Cohen at The Museum of the Moving Image, NYC in 2007.
Interview and Q & A with audience on his 1974 horror film, “It’s Alive”.
David Schwartz is curator.